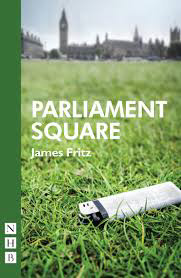 How far would you go for what you believe in?

Kat gets up one morning, leaves her family behind and travels to London to carry out an act that will change her life and, she hopes, everyone else's.

Raw, disturbing and compassionate, James Fritz's searingly powerful play forces a confrontation with some of the most urgent questions we face. What can one individual do to effect change? And where do we draw the line between absolute commitment and dangerous obsession?

What would you do? or, What did you do?

Daily we face an endless barrage of events, crises, horrors, and unbelievable breaking news.  Are we shocked, horrified, broken hearted and/or becoming immune?  Do we shrug our shoulders, click on a link to endorse a protest or petition?  Do we write emails, checks or letters of support to those groups that are providing pressure on these issues? Do we find ourselves thinking and feeling, “I cannot take one more piece of terrible news!”  Do we feel impotent?  We cannot make a difference!

James Fritz’s provocative play Parliament Square examines one person’s commitment to make an act of protest despite the cost of this decision to herself and her family. As is true so often in life, the plans do not go off as expected. The remainder of the play examines the revisionist historical telling of her life’s events, and the “cost” this fabrication extracts from her life and the lives of those around her.

I was profoundly moved when I saw this play in England in December of 2017. But it wasn’t until I returned to the States that my memory was “dusted off” and I suddenly realized that in the early 70s in Kansas I had known two people who had travelled to India to study yoga; during the first few months there they chose to immolate themselves in protest of the imprisonment of our guru. It was a deeply shocking and devastating reality.  When looking for news coverage and articles about their sacrifice in preparation for directing this play, I could find nothing. It was as if their sacrifice, their lives, had left no fingerprint, let alone footprint, on the planet.

The use of self-immolation as an act of protest has a long history, but is known most broadly   from its use in the 1960s Viet Nam War protest --primarily Thick Quang Duc’s suicide in 1963. More recently, Tibetans continue to protest Chinese rule of Tibet; closer to “home,” in Grand Saline, Texas in 2014, Reverend Charles Moore immolated himself in protest of the racist legacy of his community. In April 2018, the United States was shocked by the self-immolation of  David Buckel. The prominent civil rights and environmental attorney who took his own life in Prospect Park, New York.  He left a note which included, “My early death by fossil fuel reflects what we are doing to ourselves.  A lifetime of service…may be best preserved by giving a life.”

There is a plethora of opinions about this act of protest, but no matter what one believes, the larger question is -- “What would I do?” If or when, am I truly moved to make a statement, make a difference, and demand change.

What can I do to make a difference?

Other plays by James Fritz at UCI Libraries: