A guide of search strategies for and selected resources on the topic of Women and War.

"Rape, in wartime, refers to situations in which soldiers from national armies or nonstate belligerents sexually assault women as part of their military campaign in order to establish their domination."  The concept of rape as a weapon of war emerged in the 1990s. "The systematic and military use of rape in the former Yugoslavia conflict and in the Rwandan genocide motivated the international community to analyze rape as a war strategy. In these two cases, rape was a military stratagem and a genocidal tool. Later on, rape would expand in many civil wars in Africa and elsewhere, becoming a global concern in a very short time. The large media coverage of these post–Cold War crises contributed to the emergence of an international awareness that led to academic research and active humanitarian emergency programs."

See the United Nation's report Conflict-Related Sexual Violence from 2019 for a global overview. 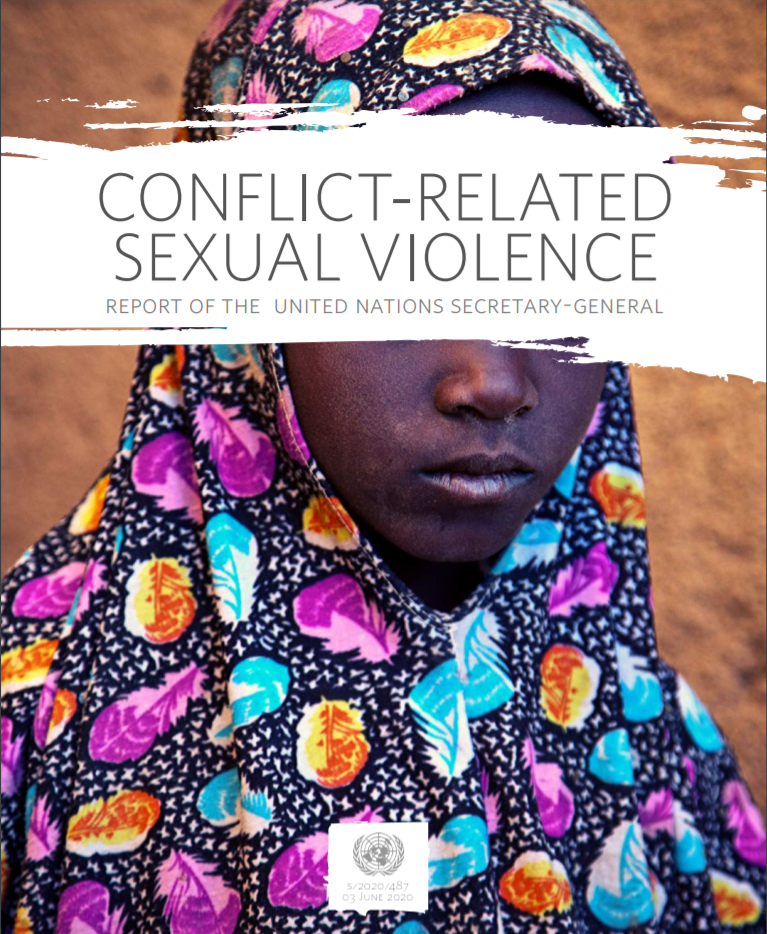 Abstract: Transnational advocacy organizations are influential actors in the international politics of human rights. While political scientists have described several methods these groups use – particularly a set of strategies termed ‘information politics’ – scholars have yet to consider the effects of these tactics beyond their immediate impact on public awareness, policy agendas or the behavior of state actors. This article investigates the information politics surrounding sexual violence during Liberia’s civil war. We show that two frequently-cited ‘facts’ about rape in Liberia are inaccurate, and consider how this conventional wisdom gained acceptance. Drawing on the Liberian case and findings from sociology and economics, we develop a theoretical framework that treats inaccurate claims as an effect of ‘dueling incentives’ – the conflict between advocacy organizations’ needs for short-term drama and long-term credibility. From this theoretical framework, we generate hypotheses regarding the effects of information politics on (1) short-term changes in funding for human rights advocacy organizations, (2) short-term changes in human rights outcomes, (3) the institutional health of humanitarian and human rights organizations, and (4) long-run outcomes for the ostensible beneficiaries of such organizations. We conclude by outlining a research agenda in this area, emphasizing the importance of empirical research on information politics in the human rights realm, and particularly its effects on the lives of aid recipients.

Abstract: This article examines the meaning and potential usefulness of a 'gender perspective' on international humanitarian law (IHL). In order to do so, it considers a number of 'gendered' themes found within IHL, including the role of women as combatants, and the gendered use of sexual violence during times of armed conflict. The authors suggest that further development and understanding of a gender perspective will contribute to the resilience and effectiveness of IHL as a system of law, and will strengthen the protection of those who are victimized and disempowered during times of war.

Abstract: In the years since the first reports of mass rapes in the Yugoslavian wars of secession and the genocidal massacres in Rwanda, feminist activists and scholars, human rights organizations, journalists, and social scientists have dedicated unprecedented efforts to document, explain, and seek solutions for the phenomenon of wartime rape. While contributors to this literature agree on much, there is no consensus on causal factors. This paper provides a brief overview of the literature on wartime rape in historical and ethnographical societies and a critical analysis of the four leading explanations for its root causes: the feminist theory, the cultural pathology theory, the strategic rape theory, and the biosocial theory. The paper concludes that the biosocial theory is the only one capable of bringing all the phenomena associated with wartime rape into a single explanatory context.

Abstract: Drawing on the author’s archival research in Germany and the US, empirical data about US-allied troop sexual violence during post-World War II occupied Germany suggests a complex interplay between gender, security, silence production, and state identity. Through a feminist security studies lens, this article theorizes about an unexplored, obscured form of de-securitization: the unmaking of a security issue or referent object as active silence. De-securitization as silence provides a unique insight into silence production, gender’s normativity, and security. To move beyond de-securitization’s presumed politicization, the argument identifies specific hypervisibilities and new state-self, dominant memory regimes as acts, discursive representations, processes, or incidents of de-securitization – producing and reproducing active silence and facilitating the making of a newly imagined, ‘good’ German state-self. for genuine gender emancipation.

Abstract: By the 1990s, 9 of 10 people who died in war from direct and indirect effects were civilians. Bombs and weapons of modern war kill and maim civilian women in equal numbers to civilian men. A unique harm of war for women is the trauma inflicted in military brothels, rape camps, and the growing sex trafficking for prostitution and by increased domestic violence, all of which is fueled by the culture of war, male aggression, and the social and economic ruin left in the wake of war. Widows of war, women victims of landmines, and women refugees of war are particularly vulnerable to poverty, prostitution, the extortion of sex for food by post-war peacekeepers, and higher illness and death in the post-conflict period. While problems exist with definitions and methods of measurement, a full accounting of the harm of war to civilian women is needed in the debate over whether war is justified.

Abstract: Sexual violence has serious and multiple consequences for the mental health of women. At the psychological level, it leads to radical changes in the image that the victim has of herself, in her relations with her immediate social circle and beyond, in the community as a whole, and in the way in which the victim sees the past, present, and future. It thus has a lasting negative impact on the victim's perception of herself, of events, and of others. At the community level, it stigmatizes the victim, depriving her of any social status or intrinsic value as a person (she is seen as unfaithful or promiscuous), and thereby modifies relationships within the community with an overall deleterious effect. This article discusses these consequences of sexual violence for the mental health of women, especially those who are its victims during armed conflicts.

Abstract: Throughout time no matter where the location, rape and other acts of sexual violence towards women have always been a part of war. Shrugged off, rape warfare has become an acceptable by-product for what men do even though the Geneva Conventions, the legal framework outlining the rules of war, prohibits it. Specifically looking at the war in Bosnia-Herzegovina and in Rwanda, this thesis will focus on how women's bodies became the battlefield. Journals, books and documentary films all present testimony on how rape went beyond being a by-product of war to instead become a tool of war itself: a strategic military plan for genocide. Secondary research examines articles within the Geneva Conventions as well as the Convention on the Prevention and Punishment of the Crime of Genocide that directly address the safety and treatment of women during war. My findings are that these structures of law very often go ignored. The creation of an International Criminal Court and two ad-hoc tribunals, however, will prosecute those accountable for committing sexual atrocities during war and in doing so send a strong message that acts of violence towards women will not be tolerated. How well this message gets heard remains to be seen as wars continue to define our future.

Abstract: When rape by an armed organization occurs frequently, it is often said to be a strategy of war. But some cases of conflict-related rape are better understood as a practice, violence that has not been explicitly adopted as organization policy but is nonetheless tolerated by commanders. The typology of conflict-related rape in this article emphasizes not only vertical relationships between commanders (principals) and combatants (agents) but also the horizontal social interactions among combatants. It analyzes when rape is likely to be prevalent as a practice, emphasizing not only gendered norms and beliefs of the society from which combatants come but also how those might be transformed by the organization’s socialization processes. In the conclusion, I suggest that the typology is relevant for analysts of all forms of of political violence and also for prosecutors, policy advocates, and policymakers concerned with conflict-related rape.

Abstract: Three top researchers explode myths about wartime sexual violence and conclude that rape in war is neither ubiquitous nor inevitable. Variation occurs across countries, conflicts, and armed groups. The fact that some commanders are able to prohibit sexual violence suggests that prevention is possible and interventions should be aimed at the level of armed groups.

The United Nations International Criminal Tribunal for the former Yugoslavia
"The International Criminal Tribunal for the former Yugoslavia (ICTY) is a United Nations court of law dealing with war crimes that took place during the conflicts in the Balkans in the 1990’s. Since its establishment in 1993, it has irreversibly changed the landscape of international humanitarian law and provided victims an opportunity to voice the horrors they witnessed and experienced."  https://www.icty.org/en/about

Selected articles about sexual violence against women in the former Yugoslavia war.

Legacy website of the International Criminal Tribunal for Rwanda

Since the ICTR’s closure on 31 December 2015, the Mechanism maintains this website as part of its mission to preserve and promote the legacy of the UN International Criminal Tribunals. Visit the Mechanism's website. https://unictr.irmct.org/

Selected articles about sexual violence against women during the Rwandan Genocide

Useful databases to search include: